i'm under his thumb

I am a pastor's wife. I am married to a fabulous, hard-working, and handsome man. We decided long ago that we were stuck with each other so we might as well enjoy it. And we do. We have 3 beautiful daughters that are all miracles in their own right. (I feel a post or three coming on.) I like to read. I like music (I'm an eclectic). I like guns. I like college football, especially the OSU Cowboys (Go Pokes!). I like Dunkin Donuts and vanilla cake. I'm trying to bring back 80's big hair, but it hasn't seemed to catch on yet. I'll keep trying. And my day doesn't start until I've had a cup of good coffee (or two.)

There are two times in my life I would never want to repeat. The first is junior high. Ugh. There is no reality show prize money large enough to tempt me to go back. The second is the first two years of marriage. Oy ve. An anniversary is a big deal, but especially when you thought you weren’t going to make it past the first two. I’m sure it was ALL his fault. I’m so easy to live with. 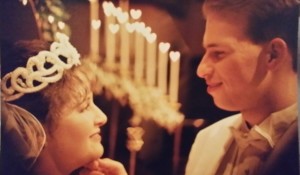 On our wedding day staring lovingly into his eyes. As they say, “Love is blind. Marriage is the eye opener.”

I did not marry my best friend. My best friends stood beside me that day. I might have spoken the typical, (insert engaged sweet sappy voice here:) “He’s my best friend…” But truly, he did not know me like my attendants did. He had never seen me without make-up, he had never seen me without my hair being perfect, and he had never known me to look frumpy in worn-out sweats and ratty t-shirts as I cleaned. He did not necessarily know my ugly side, the first thing in the morning face, my aversion to putting the toilet paper on the roll, the hives I develop from  putting my shoes in the closet (so I don’t), or my morning breath side. But he was going to learn. And love me anyway.

To say the first two years were rough would be a HUGE understatement. I was raised you argue until someone gives in (usually him.) He was raised that a married couple never argues. We had a lot to learn, because both sides are wrong. I was the baby and he was the oldest of three boys. Before we got married his idea of conflict resolution was beating up your brother and going on your way. He did at least know that wouldn’t work with his wife. Thankfully, we learned to get along. We learned to work together, control our tempers (most of the time), and pray for each other. Only God can truly change a person.

Each year gets better and better. I remember the night before we brought Lydia home, I told him, “I really like you.” He informed me I was supposed to. I reminded him the Bible says I have to love him, it never says I have to like him. And I really like my husband. We have endured a lot over the years: those rough first years, tough jobs, crazy family members, infertility, loss of family, health issues, and the list goes on. But God has been faithful in every situation and He has drawn us closer to Him which in turn draws us closer to each other.

I can now positively state he is my best friend and he loves me despite my short comings. We have a good time together. We laugh all of the time, we finish each others sentences, we think the same thoughts, and we’re working on him reading my mind. We love to spend time together. It’s much harder now with our three beautiful daughters, but I appreciate those times we do go out all the more. There is not anything he does not know about me. He has seen me at my best and he has tolerated me at my worst.

So to my fabulous husband: Happy Anniversary! I love you more than I could ever express. Thank you for being you and loving me through the crazy times as well as the good. You are the cream in my coffee, the root beer to my float, the cheese to my burger, the peanut butter to my chocolate, and I could never imagine life without you. May the next 18 years be even better than the first.